Can thermodynamics be applied to single molecules in biology?

Some while ago I had a discussion with the head of an internationally renowned neuroscience group about the use of thermodynamics in biology. He told me that he has heard from a close biophysicist friend (also a very prominent scientist) that thermodynamics is not applicable on the scale of single molecules. This is because it is a macroscopic theory that refers to average quantities on large scales. I was somewhat surprised by this statement because life is so obviously sensitive to temperature and other thermodynamic variables. It never came to my mind that anyone could doubt the central role of thermodynamics even on a molecular scale. But according to my colleagues, thermodynamics is a theory about macroscopic averages only - and a single molecule doesn’t know about averages - since it is only one single molecule which is always in one particular state at a time. Isn’t that obvious?

No, this is not obvious. In fact, it is terribly wrong!

There exist many prejudices about thermodynamics. The  “thermo” in thermodynamics suggests that it mostly deals with temperature or heat, but in fact this is only one aspect of it. It also deals with pressure, electrostatic potentials, chemical potentials and pH-values. It deals with binding constants and reaction kinetics, charging of membrane capacitors and flows of ions. Thermodynamics is not only about averages but also about distributions and fluctuations. The fluctuation aspect is particularly important because it defines the magnitude of susceptibilities such as heat capacity, compressibility and capacitance. Fluctuations can also be big on very small scales. Motion on the atomic scale defines the temperature, and one can observe the associated fluctuations as Brownian motion and diffusion.

Thermodynamics is everywhere. It is applicable to the universe and to nuclear particles. It is more than a theory, it is rather the language of physics. It defines what we mean by energy, pressure and temperature. In his scientific autobiography from 1949, Albert Einstein wrote: “Therefore the deep impression which classical thermodynamics made upon me. It is the only physical theory of universal content concerning which I am convinced that, within the framework of the applicability of its basic concepts, it will never be overthrown.”
Or as another colleague of mine put it: „Thermodynamics is like a good red wine. The older you get, the more you appreciate it.“ Getting older might eventually turn out to be problematic, but this is just increase in entropy - another important concept in thermodynamics. And honestly, what should be wrong with a glass of a good red wine?

For the above reasons, I believe that thermodynamics is the physics equivalent to wisdom.

Let's go back to single molecules and take the binding constant of a drug to a receptor protein as an example (see figure below). The binding constant corresponds to the equilibrium constant in the mass action law, which represents the ratio of the probabilities to find a bound or an unbound form of the drug. This law has been derived assuming that the chemical potentials of the drug in solution and the drug bound to the receptor are equal - which is one of the consequences of the second law of thermodynamics. The second law states that in equilibrium the intensive variables (temperature, pressure, …, but also the chemical potentials) are uniform in space and time.
The equilibrium constant corresponds to a Boltzmann-factor in the distribution of states from statistical thermodynamics, which depends on temperature, pressure and all other intensive variables. The concentrations in the mass action law (e.g., the concentration of a drug in the cytosol of a cell) correspond to probabilities to find a molecule in a given state. Similarly, the pH is related to the probability to find a proton. Here, we have not even mentioned that each molecule is surrounded by water and ion clouds, i.e., that in biology a single molecule does not even exist. 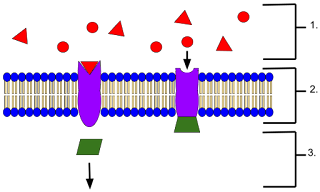 Schematic drawing of the binding of drugs to receptors. Picture from Wyatt Pyzynski (Wikipedia)

Therefore, even on the scale of single molecules we always talk about statistics, ensembles and average probabilities to find a certain result in an experiment. The equilibria between folded and unfolded proteins, the cooperative binding of oxygen to hemoglobin or the denaturation of the DNA upon heating are other examples for the application of thermodynamics on single molecular scale.

Thus, by using equilibrium constants and adjusting pH values and temperature, every molecular biologist implicitly acknowledges that thermodynamics is valid on the scale of individual molecules.

How large is the nerve pulse?

Does it matter how large the nerve pulse is? Yes, in fact it matters for the choice of the level of the theoretical description. If the nerve pulse were tiny, it would make sense to employ molecular modeling. If it were large, then one would rather go for macroscopic theories such as thermodynamics or hydrodynamics. Each phenomenon requires a description the works on the the same scale. But what actually is the scale of a nerve pulse, and which approach is the right one?

When the voltage changes during a nerve pulse are measured with electrodes, one finds that the pulse lasts about one or two milliseconds. This seems like something very small and it influences our conception of how the nerve pulse looks like. We envision it as something of the dimension of the thickness of an axon or a dendrite, or of the size of a synapse.
This conception manifests itself in the artistic drawings of neural networks on hundreds of web sites of Neuroscience departments and Science Blogs from all over the world (see the image above). Other examples (found after a very short search on the Web) can be found at the pages of the Boston Children Hospital, Sidney Medical School and the Science Blog Medical News Today. On the basis of this picture it seems natural to assume that the excitation during synaptic transmission is of the dimensions of the synapse itself.
Admittedly, all these images are artistic drawings, which are meant to illustrate the situation in the nervous system without scientific rigor. However, judging from the images: How large do many if not most neuroscientists imagine the length of an action potential? Maybe a micrometer, or a few micrometers? Definitely smaller than the cell nucleus and much smaller than the nerve cell. Maybe something comparable to the size of proteins or the distance between them?! This might explain the dominance of molecular explanations in biology.

All of these drawing have one thing in common: They are all wrong.

where ∆x is the length of the nerve pulse. One finds a range of possible sizes of nerve pulses ranges from 1mm to 20 cm depending on nerve. Nerve pulses are in fact very large - larger than some cells. I have listed below the dimensions of the action potential for various nerves:

Don’t grill me because of a factor of two in length of the pulse because it depends on how one defines the time scale of the nerve pulse. For the calculation above I made the simplifying assumption that the time scale of the nerve pulse is always ∆t=1 ms. It does not really matter because the point is that nerve pulses are very long. Definitely much, much longer than cell bodies and synapses, and also much longer than the diameter of axons and dendrites - they are also larger than the distance between nodes of Ranvier in myelinated nerves. Therefore, the term saltatory conduction does not make sense.  In fact, nerve pulses are macroscopic and larger than many cells. Motor neurons in mammals can have a length of 1m or longer. This corresponds to the length of about 10 action potentials. Squid axons have a length of a few cm, which corresponds to the length of only a few single action potentials. In contrast, an astrocyte (which is a kind of glia cell) has a diameter of 50-100 µm including its extensions. They are much smaller than any action potential. If they are excited, they must be excited as a whole. It is possible, the one single action potential spans several cells.
Since it is unavoidable to conclude that nerve pulses are macroscopic, it is very peculiar that the models to explain the nervous impulse are built on the methods of molecular biology, meaning that they explain the nerve pulse bottom up on the basis of single molecules.

However, in physics it is well known that there exist emerging phenomena on larger scales (for instance waves or phase transitions) that cannot be understood on the scale of a single molecule. Why is this so? The reason is that the typical density or temperature gradients  in a wave on the length scale across a single molecule is often smaller than the thermal motion. This means, that single molecules do not see the waves at all, and something like waves cannot be explained on the level of single molecules. To explain phenomena on larger scales one needs theories that apply to the large scales. These are particularly the laws of analytical mechanics and hydrodynamics, which can not be constructed by adding single molecule features. It would be absolutely unreasonable to assume that phenomena such as waves - phenomena that everybody knows to exist from daily experience - should not exist in biology.

But strange enough, when it comes to biological systems a complete community has chosen to use a scientific language that excludes well-known physics from the list of possible explanations of biological function. This cannot be correct.

For this reason, we and others have proposed that one needs macroscopic physics to explain phenomena on the scale of a nerve pulse. I will discuss this in more detail in later posts.

A "neuralgic point" is something like a funny bone. When you hit it, you feel it. In some languages such as German, the term "hitting a neuralgic point" is used synonymously with "hitting a nerve". What I believe is the nervous system relies on the laws of reversible physics and that the nervous impulse is something related to sound waves. Did I say "believe"? In fact, I know it. Daily language knows it, too: "good vibrations", "ringing a bell" or "being in harmony" are possibly more than just analogies. Stay tuned.
- Dezember 06, 2019 Keine Kommentare: